Fourth Birthday Party #2: UP! and Rainbows! (the friend party) 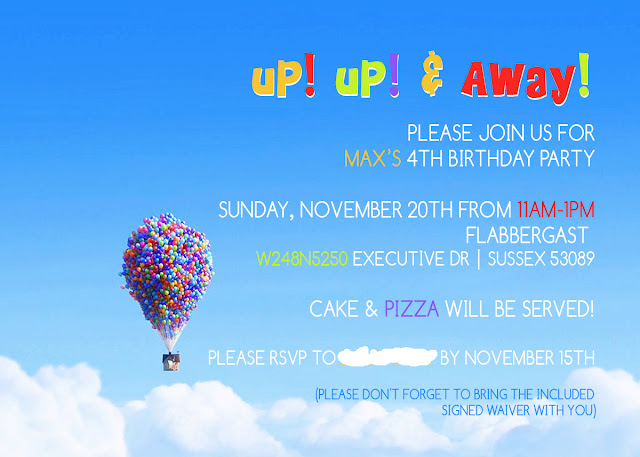 invitation custom made on Etsy

When Max first told me he wanted to have an UP! party, I was ecstatic.  I love themed things, and there are so many fun things with that movie!  I started googling for ideas, and there weren't that many out there.  Luckily, this is about the time that Pinterest came into my life -- so I scoured there for ideas and even had my own board dedicated just to Max's 4th UP! birthday party!

When it became apparent that I was going to have to branch out a little bit beyond just UP!, little Max suggested we do rainbows also.  What a great idea!  And, there were LOTS of rainbow ideas to choose from!

We decided this year to have his party outside of our home -- for several reason:  1) we had just moved; 2) he wanted to invite 16 kids, and I really didn't want that many kids in my house; and 3) cleaning up after 16 kids and their adults is not my idea of a good time.  So, I searched around and remembered that we had gone to another of his classmates' party at a place called Flabbergast.  We had also gone there a couple of times beyond that party just to blow off some steam and have fun.  It's a great place to have a party and the kicker was when they were running a promotion for a HALF-OFF party.  Those of you that know me, know that there's nothing more I love in life (well, maybe besides my family and friends) than a good deal. How could I pass up on a party for 16 kids that was LESS THAN the cost of a party for 8 kids?  I was sold.

Flabbergast was great with allowing me to bring in some outside decorations and food beyond what they offer their parties (pizza and drinks, mainly). Knowing that my little man is not the biggest fan of pizza, I decided to bring a fruit tray along...rainbow, of course: 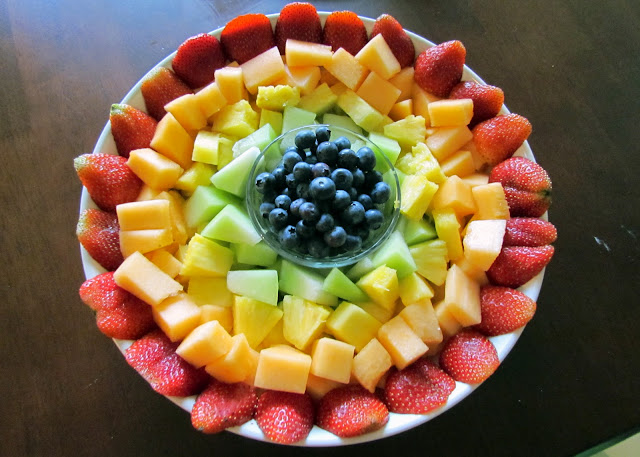 I think it turned out really cute.  In hindsight, I wish I would've bought mini clear plastic cups and pre-made 16 little fruit salads for the kids because I spent a long time going down the table and dishing out fruit to all the kids.  Kind of a pain especially since Flabbergast didn't have a serving spoon so I had to use a small plastic spoon.  :)

But, what I was most proud of and had the most FUN doing were the UP! themed goodie bags -- 16 of them, no less!  (and 5 more little kiddie bags because we had some little guests as well at the party). 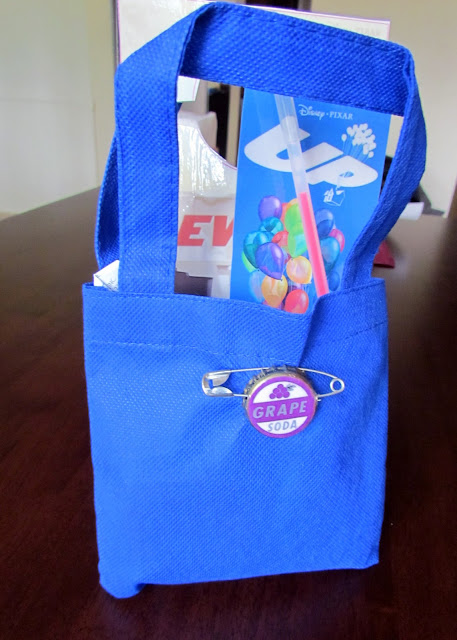 Here is what the bags looked like all assembled.  Don't you just love the Ellie badge pin? 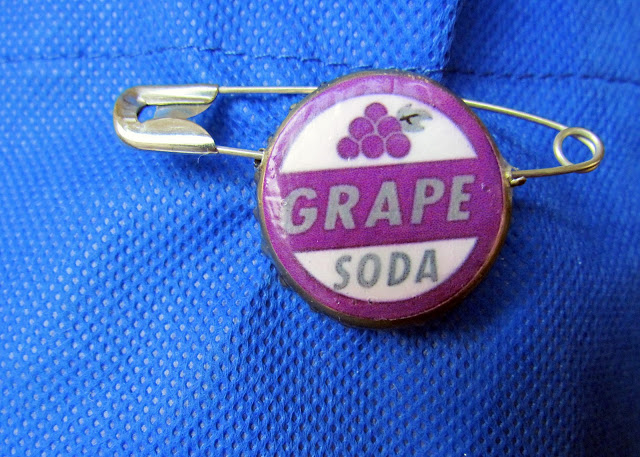 These were so much fun to make.  I got the template on Etsy here and then printed them out, used a circle punch and mod-podged them onto a bunch of beer caps.  It was a really hard task emptying all those bottles of beer, but I stood up to the task -- and conquered it!  :) 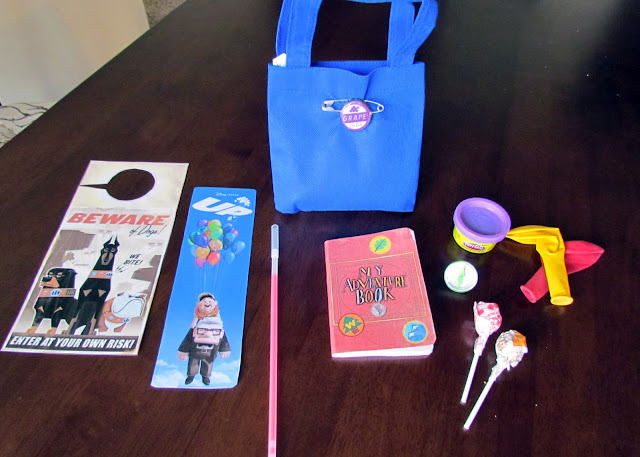 Here's all the loot taken out of the bag -- a door hanger, a book mark, a neon-glow stick (seriously, my kids LOVE these things), a "My Adventure Book", playdoh, a compass ring, balloons and dum dums (because what is a treat bag without an actual TREAT inside?). 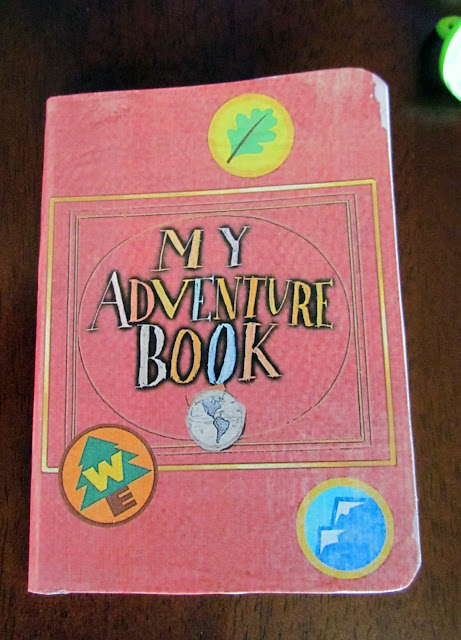 These books were also a lot of fun to make.  I found the template HERE on the Disney website.  I scaled it down to fit the little journal notebooks I found at the store and then mod-podged the cover to the cover of the journals.  So cute! 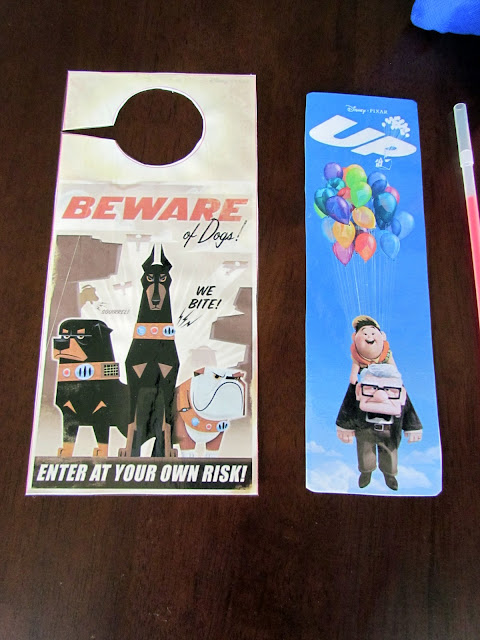 The template for the door hanger and bookmark were also on the Disney site.

And now, some photos from the actual party.  Flabbergast is a huge indoor play area for kids -- a big jungle gym and tons of inflatable slides, bouncy houses, etc.  Sam wishes he was big enough to participate, but he's still just a little bit too little.... 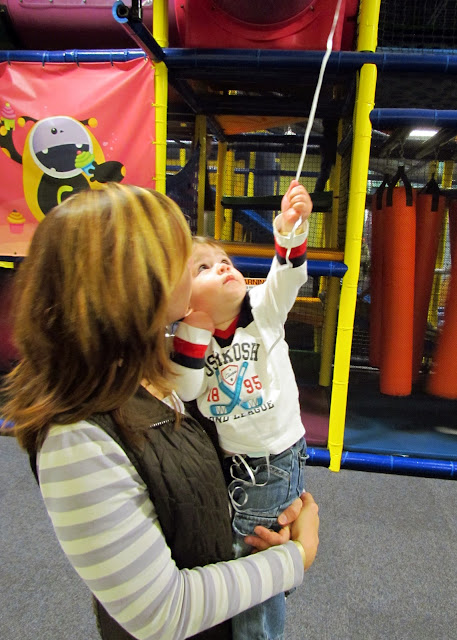 So, we entertained him with balloons, and our old neighbor Heidi got some snuggles in while the kids blew off some energy on the play equipment. 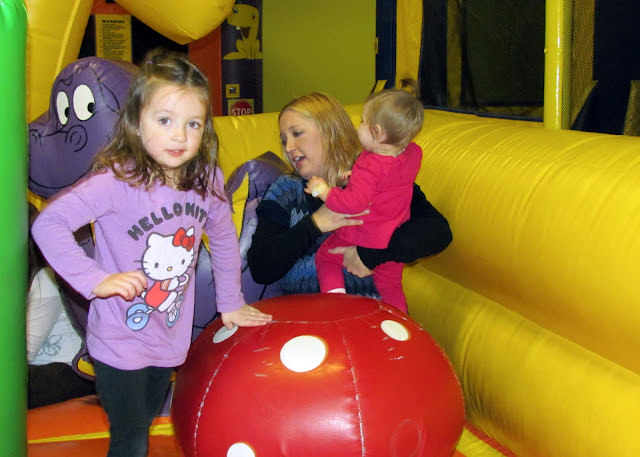 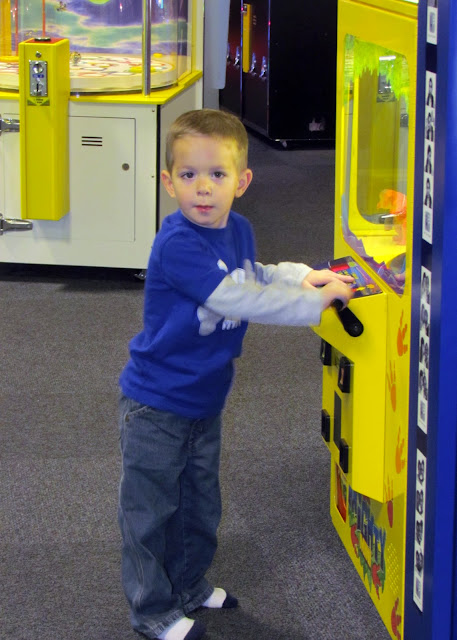 Another one of Max's friends from school, Cole.  Cole is the sweetest little boy ever. 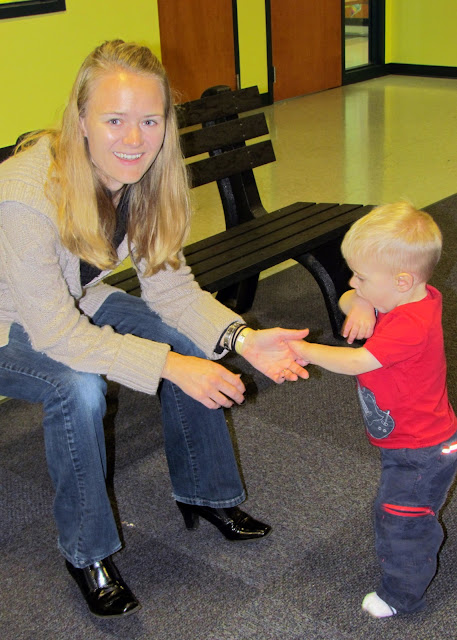 Max's other girlfriend at school, Grace also has a younger brother, Tommy who is in Sam's room!  Here's Grace and Tommy's mom with him. 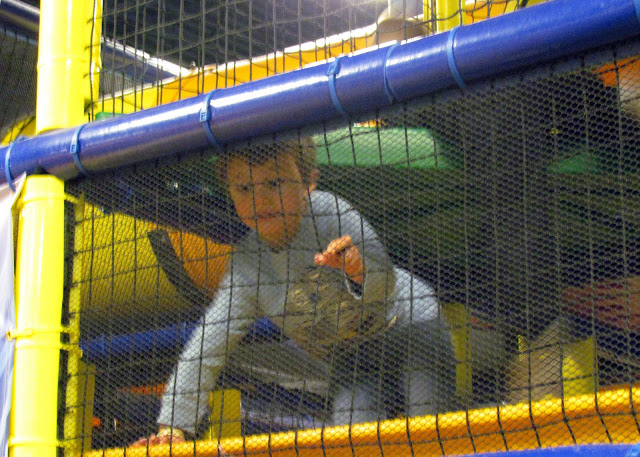 Max climbing up in the jungle gym. 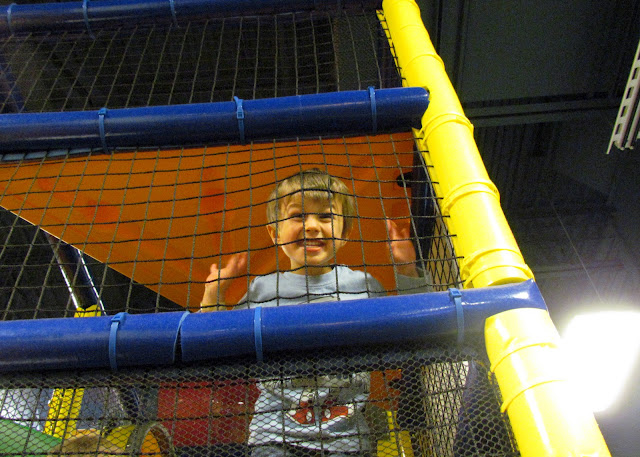 Look how high I am, mom! 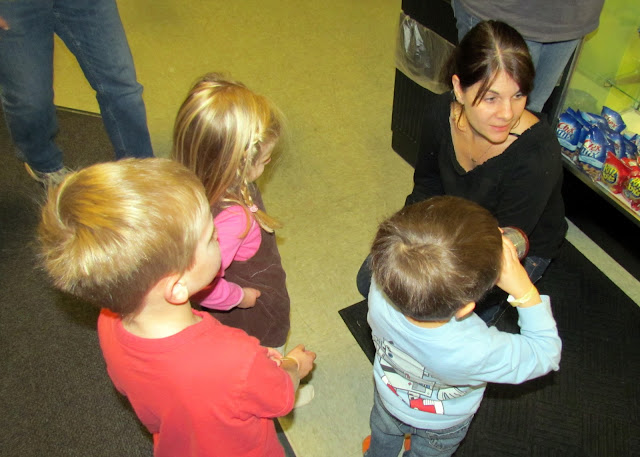 The don't set out any of the drinks until you are ready to eat your pizza, so the kids kept cornering me and telling me they were thirsty.  Of course, getting water out of the bubbler wasn't good enough so here I am being convinced that I should buy them a juice box... I am such a sucker.... 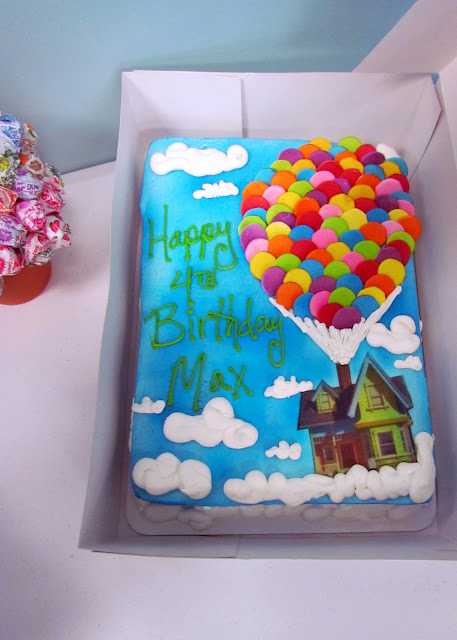 The UP! cake done by Cakes while you Wait in Pewaukee -- seriously such a delicious cake -- and look at that design!!!!??!!!  How awesome is that? (a side note -- if you click through to their website their 'cake of the month' also happens to be an UP! themed cake -- in Dec 2011). 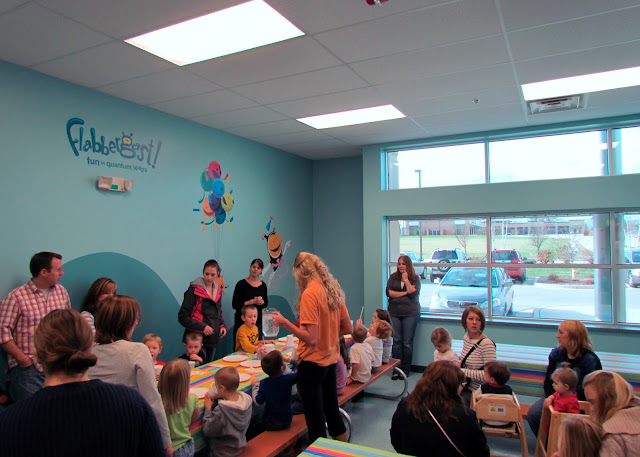 Here's our party room all full of the kids and moms and dads who tagged along. 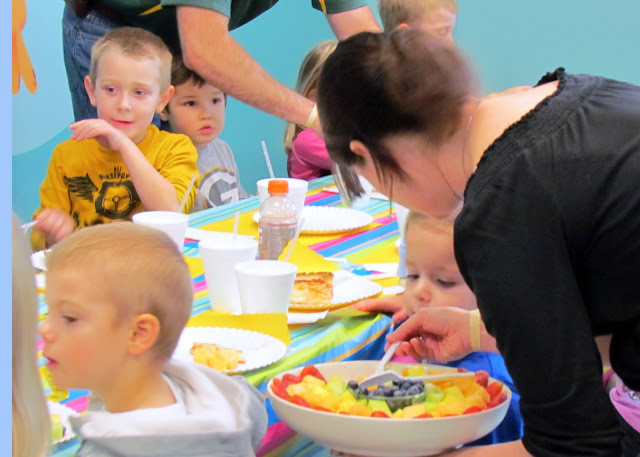 Handing out the fruit salad to the kiddos...

It was a full house of kids -- the more the merrier! 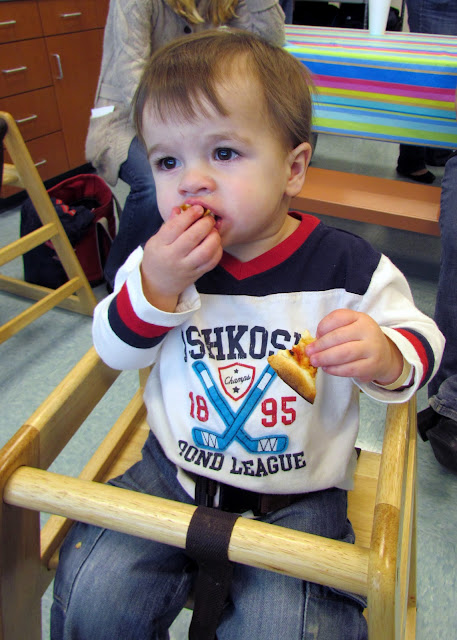 Sam even enjoyed a piece of pizza or two!

Overall, it was a great party -- Max got WAY too many presents (as always) and I ended up squandering some of them to give to him later.  Having a November birthday makes xmax time so much harder because you feel like your house is just swimming in toys!!

Amazing! I love the gift bags! You did so much work preparing everything, and it is wonderful. That cake is beautiful. The kids looked really happy - and yes, the 3 hour naps say a lot!

It was a great birthday party! You did a great job with the invitation and gift bags!

Incredible birthday party and equally adorable cake. The UP-party theme is great as it reminded me of my nephew’s birthday party at one of kid-friendly New York venues as cake was quite similar to this one and all kids loved it.

Lovely post! I was looking for good ideas to throw my nephew’s birthday party. Recently enrolled him at one of Phoenix kindergarten. Will use these ideas for UP-themed party as really want to make it awesome for him.