A lot has been going on over the last few weeks, and as a result blogging has taken a back burner.  I apologize because I know some of you who follow along here aren't on Facebook, so this is one of your only ways to stay current on the boys.

So, I'm going to cram a lot into one post just to try to catch you back up on some of the going-ons around here!  Enjoy!

Sam enjoys watching his big brother at Tae Kwon Do.  He even gets into part of the workout!  We're not going to let him start officially for at least another year, but he's getting a great introduction to the basics just through observation.  And, he's got a great push-up down already!

Sam also really enjoys fishing with Grumps!  Last weekend, his Uncle Fran posted a picture online of a nice sized striped bass that he caught, and Sam was amazed by the picture.  The rest of the day he talked about catching a big bass like Uncle Fran.  The next day, knowing that we were going to Grumps' for dinner, he woke up from his nap and the first words out of his mouth were "I'm going to catch a fish as big as Uncle Fran's bass."  I think he succeeded! 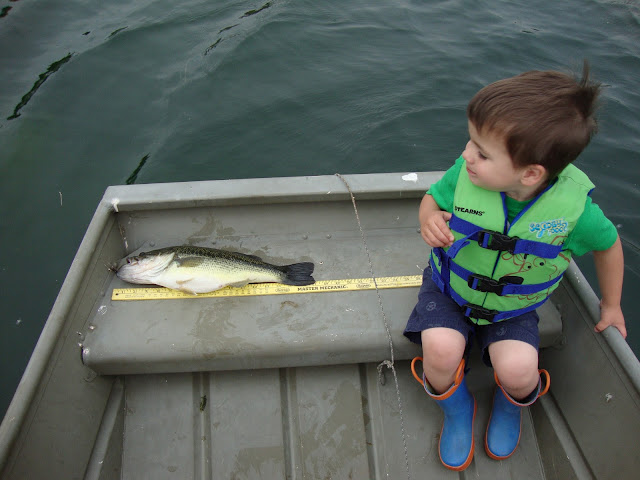 Sam was very proud of his fish but he wouldn't touch it.  In fact, the minute it started moving he got a little squeamish.  Guess we'll have to work on that! 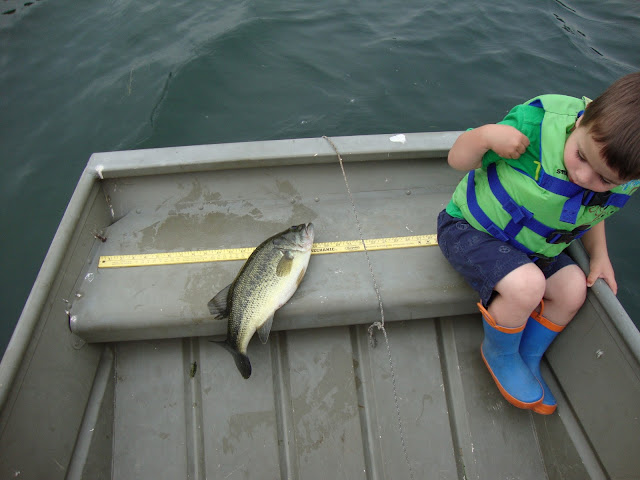 Sweet Sam.  Lover of all things boy and all things sports.  This kid keeps us on our toes and makes us laugh a million times a day.  But he's got the sweetest set of brown eyes (and super LONG lashes) that make you forgive him anything in a heartbeat...

And he's got a great throw already! Future quarterback?

Big brother Max also is getting more and more fun each day!  I love seeing him so proud of the things he is learning at school and putting all his new knowledge into practice.  One morning I took both the boys with me on a shopping trip, and he insisted on bringing along his notebook and pen.  I caught him doodling this inside!!  He sure is smart! :)

Outside he is getting more bold and adventurous.  He can now swing completely unaided (thank the Lord!) and he loves to try doing the monkey bars.  He can't do them by himself but he can do one or two on his own with a spotter.  He's also super excited by the two-wheeler my parents have at their house for him to ride -- this surprised me a bit because he doesn't always like to ride his bike (with training wheels) at home...

For the most part, these two are inseparable.  Sure, they annoy the crap out of each other a lot of the time, but if you try to separate them they throw a fit!!  They love sharing a room, and they really are the best of friends...

Last week marked the last week of school for little Max in 4K.  His class celebrated with a fun class picnic, which included a rousing game of duck, duck, goose (not duck, duck, gray duck you silly Minnesotans)!  Even Sam tried to play along!

Max made a lot of friends this year at 4K.  Any hestitations he may have had at the beginning of the school year were long gone by the end.  He even had a best friend (who he called his Best Dude).  His teachers were also phenomenal.  The lead 4K teacher celebrated her 25th year teaching 4K!  I have no idea how she's lasted this long, but I am awfully thankful that she has because she has been a wonderful influence on Max.


They even had a sweet graduation celebration and ceremony for all the 4K'rs.  It really made them feel special.  Max insisted on wearing a tie (as did Sam who wants to be just like big brother) and I can't get over how grown up and mature he looks!  He is quickly growing out of his baby face.  Though he constantly reminds me that he will always be my baby no matter what.  Thank goodness!  :)

And as for me?  I was busy enjoying getting completely spoiled by my boys for Mother's Day...

Hanging petunias, homemade cards, a necklace from Sam, a love note from little Max along with two perler hearts and a hand-decorated tote bag that I now use as my work bag.

My rhubarb hookup provided me with a plethora of delicious rhubarb so I canned some rhubarb preserves as well as some delicious rhubarb apple jam (with the last of the frozen apples from our old house).  Both were SUPER delicious.  Little Max enjoyed making the apple rhubarb jam with me.

We discovered a bleeding heart AND a trillium plant in our yard!

Some cravings have started up again.  One night, while running, I started getting a craving for watermelon.  I knew we had a quarter of a watermelon in our fridge at home and it was all I could think about for the rest of the run.  The minute I got home I pulled that delicious melon out of the fridge and chowed down!  Big Max walked in the house from outside while I was mid-melon and just stopped and stared at me.  Then he took a picture of me (I had already taken one of myself because I realized how ludicrous I was).  Too funny!

I haven't had too many weird cravings -- and of the ones I have had, most of them have been fruit related.  I've been a big fan of citrus -- oranges in particular, and McTrois also seems to enjoy bouncing around quite a bit after I eat one.  Overall, the pregnancy is progressing well and I am feeling good.  I am definitely  more tired this time around -- I feel like I'm STILL waiting for that second trimester burst of energy -- but I am chasing two young boys around and working full-time, so that explains a lot, I suppose.

Here I am at 21 weeks.  Heading out for my weekly Pi-Yo class.

In addition to the Piyo, I am still running.  I still mostly get out in the evening, and I love seeing cool things on my run like this whitetail deer that for some reason wasn't frightened away by my heavy labored breathing!?  Odd... :)

And the culmination of all my training will occur THIS Saturday at the Summerfest Rock N Sole half-marathon.  I am excited, nervous, thrilled, you name it!  I can't wait to give it all my best -- knowing that I probably won't do as well as I'd have liked to, but also knowing that I no matter what I do I'll be accomplishing something pretty awesome.  The running has definitely gotten harder the last few weeks -- the weight of my belly is affecting my stride which affects a bunch of other factors of my running.  I bought a support belt in the hopes that it will help keep the front of me more stabilized during the run. I'm not so sure about the chafing that will likely occur....but I'm going to give it a go.  If you have any extra good thoughts or prayers laying around, please send a few my way Saturday morning! 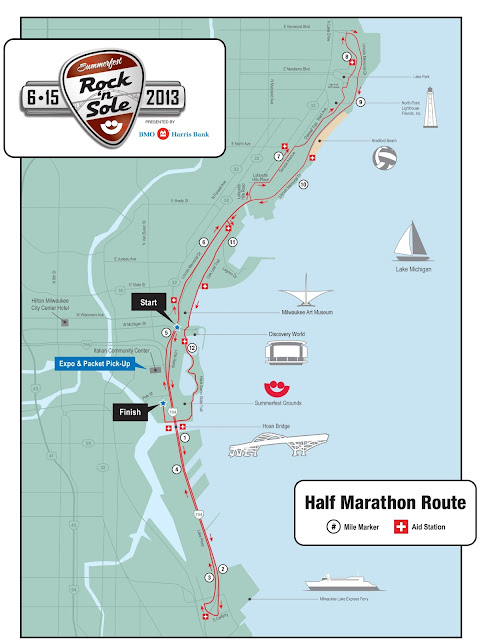 I think that about covers the updates for now!  Stay tuned!
Posted by Stefanie at 3:16 PM

Thank you for this update, because I am one of the no-FBers! ;) YES! Miss N can swing independently now, too! I am hopeful for the day the Mr can as well, but for now it is nice to have conversations while we push his swing.// I absolutely adore the Proud of my Big Brother photo. His pride and Max's I-dunno expression are so perfect. It's a treasure to catch the pure emotion!// Your petunias are gorgeous. I might need to look into some for my own back yard! And yes, Max did a fantastic job drawing you on the tote bag. Complete with turquoise earrings :)// You look incredible. I'm so impressed with your achieved health goals! I will be thinking of you this Saturday morning. I hope it is a great day to run and I know you'll ROCK IT!