Well, my nesting phase has finally kicked into high gear, so I've been able to get a bunch of the projects I've had on my list crossed off.  McDuex's nursery was one of those projects...and it is *almost* done.  We still need to install the cordless blinds for the windows and put another closet rod in the closet and some minor cleaning, but for the most part...everything is DONE!  Which, even though I know I won't be **using** the nursery for a little while yet, is a relief to me.  Mainly, because I can remember how LITTLE you get done for those first few weeks once a new one is around!! 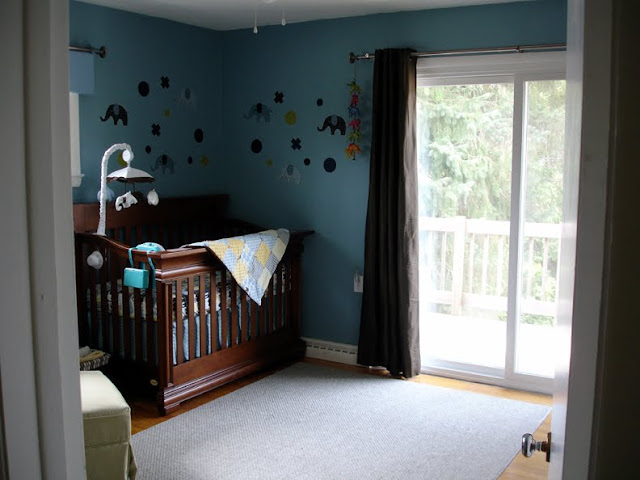 Here is the view of the nursery when you stand in the doorway.  McDuex has a pretty large room -- it is bigger than lil Max's (ssshhh, don't tell).  He's also got a nice patio right off his room.  Mom is looking forward to being able to sit outside on a warm summer night nursing in a rocker on the patio!  :) 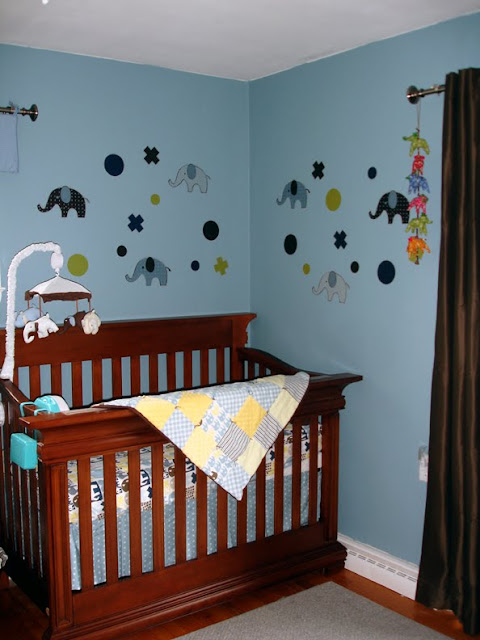 If it isn't obvious, the 'theme' for the nursery is elephants.  I used the Dwell Studio line from Target as my inspiration (because I found the bedding on clearance, and it was pretty darn cute!).  I knew I wanted to do some sort of decal on the walls.  I threw around several ideas of how to do the decals -- adhesive vinyl and a Cricut; fabric with fusible adhesive...  I finally settled on using a scanned image of an elephant and then photoshopping it to match the colors in the bedding and printing off the image on 8.5 x 11 sheets of clear labels!  They stick wonderfully to the walls, and it was a pretty inexpensive and simple solution!  The quilt on the bed was handmade by a good friend and her husband.  They used the Dwell Studio elephant receiving blankets to make it!  It is so soft and cozy and the perfect addition to the nursery! 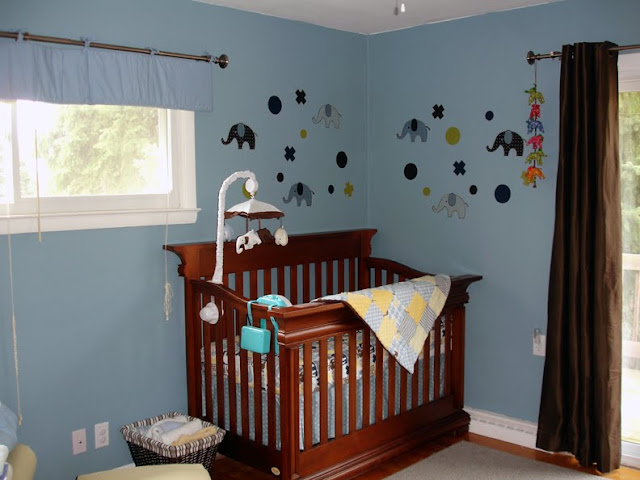 Ignore the strangulation hazards hanging in the left portion of this photo -- those old horizontal blinds will be removed as soon as the blackout cordless blinds arrive.  The valance hanging over those windows was made from the bumper that came with the crib set.  I personally don't use a bumper in the crib (AAP recommendation/SIDS hazard), so this was a perfect solution to re-use that part of the set that would have otherwise gone to waste! 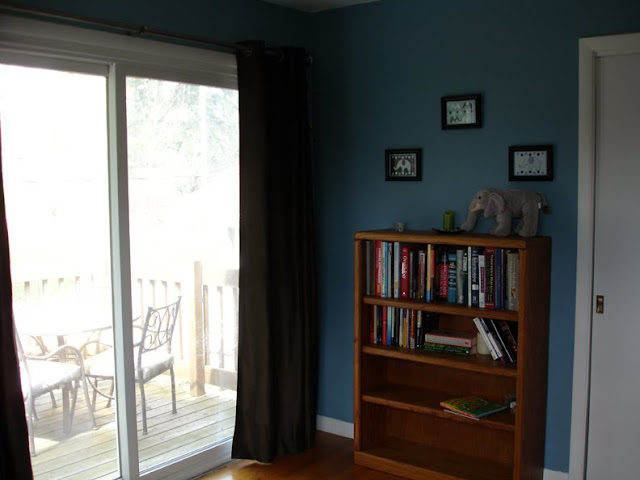 We're starting McDuex off early with some more intellectual reading:  Organic Chemistry, Medical Microbiology, Ornithology and Immunology to name a few...  Just kidding.  Eventually these books will move downstairs into the office in our extension, but for the time being they are going to hang out here in McDuex's room.  Maybe he'll learn from them just by nature of proximity?  Doubtful....  Doesn't that sun streamed patio just look so inviting?   I can't wait to get out there and relax!
In other McDuex news, we are doing well and pretty much ready for his arrival.  My official due date is April 22nd, but as we all know, babies are always on their own timelines, so we'll have to wait and see when he wants to enter this world.  Hopefully not this week, however, as my OB is off on Spring Break!  :)
Without giving off TMI, the good news is that apparently I am already about 1/3rd of the way done with my labor...which doesn't mean much in terms of WHEN the baby will come...I was the same way with lil Max for the entire MONTH before he arrived.  What it does indicate is that this labor will likely be just as quick (if not quicker) than lil Max's....if that is possible!  LOL.  Although, now that I have just typed that, you know I've jinxed myself and I'll end up having an uber long labor.  Either way, the baby will come!
Posted by Stefanie at 6:30 AM

It looks really great! You are really creative to think of all those different ways to use the elephant inspiration. What a lucky boy to have a patio off his room!

Great job on the room! I never thought about how you can easily take him out on the deck and hang out:) Maybe the fresh summer air will help him sleep well!

It's beautiful. Love the color. And the elephants. He's going to love it.

Great job on his room! I'm impressed with your resourcefulness on the decals project. I've been too nervous to nail anything into the walls over here, still have a ways to go on the room!